The first practical application of the humble screw thread was developed by Archimedes in the 3rd century B.C. He used a pipe wrapped around a shaft in a helical pattern to make a crude bilge pump for ships Figure 15 & Figure 16. Later Archimedes wrote a mathematical treatise on spirals. 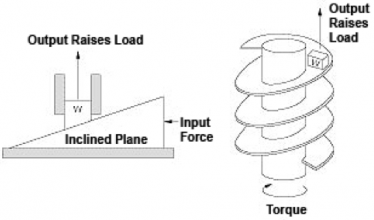 The family of screw threads including Acme, Unified, Trapezoidal and ISO is known as Archimedean screws because they exhibit straight thread profiles in their axial sections. Archimedes took the basic inclined plane and wrapped it into a spiral shape. Rotating the spiral in one direction raised the load and rotating it in the other direction lowering the load. In the 16th century, Leonardo Da Vinci conceived the first flying machines which used the screw thread principle.

Today’s propeller-driven ships, airplanes, and helicopters can be thought of as utilizing screws against air or water, which act as the mating nuts. Early screws were made by wrapping the wire around a plain bar. Nuts were made of softer material (copper for example) by forging them around the wire-wrapped rod. In fact, modern-day manufacture of earth drills and material augers still uses this technique. Later screws were cut from a solid bar using single-point cutting tools or chasers.

Threads are formed completely by chipless cold forging first began in the late 1800s. Heavy thread rolling of Acme, Ball screw and worm thread forms began in the late 1950s. Because of its many advantages, thread rolling is the preferred method of manufacture today. Early screw manufacturing suffered from the absence of accurate and powerful machinery capable of holding minimally accurate tolerances. This was compounded by the lack of accurate inspection methods. For many years screws and nuts were manufactured and used in matched sets, and as a result, were not interchangeable.